The Composite Inflow Performance Relationship is based on the combination of PI model, presented in the previous articles “Well Inflow Performance”, and “Vogel’s inflow performance relationship”. As per the aforementioned articles, PI model could be used if the well producing a single phase flow with no gas in the solution (Pwf > Pb). In the other hand, Vogel’s IPR could be used when the well’s flowing bottomhole pressure (Pwf) is below the bubble point pressure (Pb) and if the produced fluid is pure oil.

If the Pwf is below Pb and well’s produced fluids is a mixture of oil, water, and gas, the inflow performance could be described by the Composite IPR. In this case, IPR curves are somewhere between the curves valid for pure oil (Vogel model) and the one valid for Pwf > Pb (PI model).

The following graph shows the differences between these methods in graphical form: 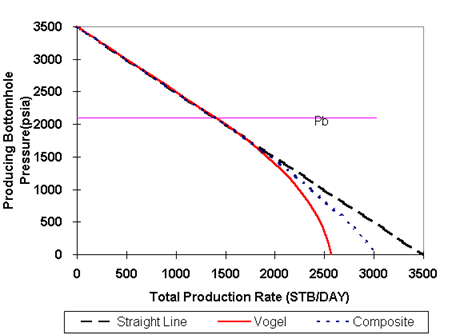